A costume worn by Veronica Lake from Paramount Studios

This Veronica Lake costume was designed by Edith Head for the movie "Saigon" made in 1948. 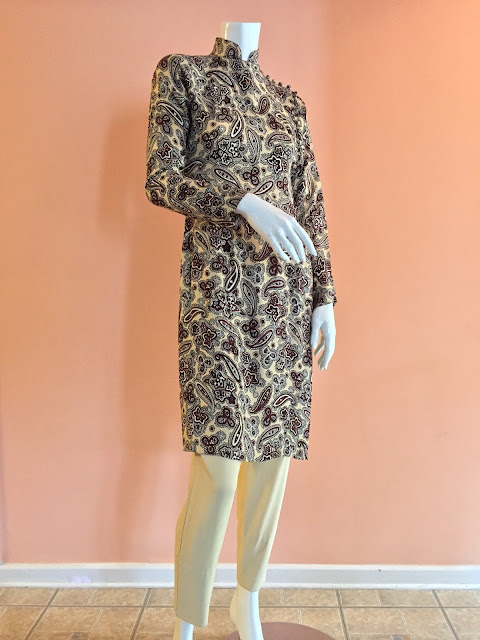 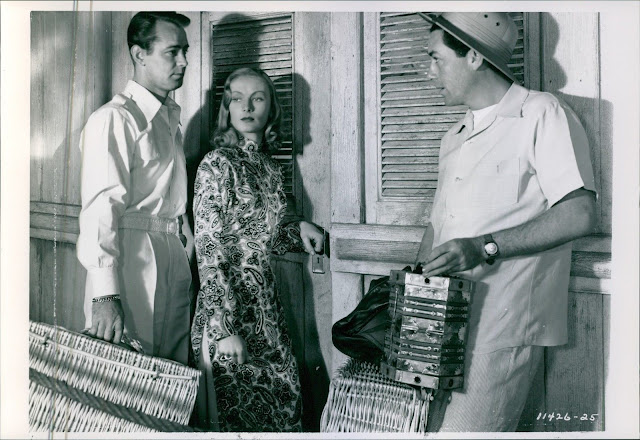 "Saigon" is a tale of espionage and romance set in the Far East, and Lake co-stars with her frequent leading man, Alan Ladd. They became a popular on screen couple after their breakout roles in "This Gun For Hire" one of the more famous film noirs of the 40's. Their on screen chemistry was so intense that Paramount decided to team them up three more times, with "Saigon" being their last outing together.

Veronica Lake found stardom practically overnight after playing a sexy nightclub singer in "I Wanted Wings," and her next film, Preston Sturges' "Sullivans Travels" co-starring Joel McCrea, made her an 'A' list leading lady at Paramount. During the 1940's she starred in many top movies at the studio before her career waned by the early 50's. She was also one of the pinup girls of WWII, and her famous "peek-a-boo" hairstyle of her bangs hanging down over one eye became a rage in 1941 and was widely copied by women who wanted the same sexy look. With that hairstyle and her smoldering beauty she became one of the sex symbols of the 1940's and was regarded as one of the most beautiful women in film. 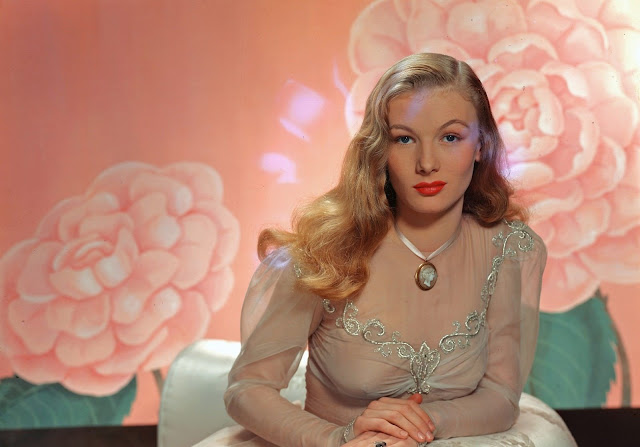 For about 10 years she was a top star, but it all ended very suddenly and she practically fell into oblivion. There's the famous story of her living in a hotel in NYC and waiting tables there just to get by. However she did continue to act on stage and TV and also wrote an autobiography. Her life is one of those Hollywood stories that is almost folklore, of how it can give you fame and fortune and then it all disappears. Regardless of that, she does leave a lasting legacy of beauty on the screen, and is probably the most legendary actress of the 'film noir' genre.

In "Saigon" she wears the costume for a long portion, as they are traveling to Saigon on a boat, and then arriving and checking into a hotel. It's a good 15 minutes of the movie and it's nice to see a costume on screen for that long. 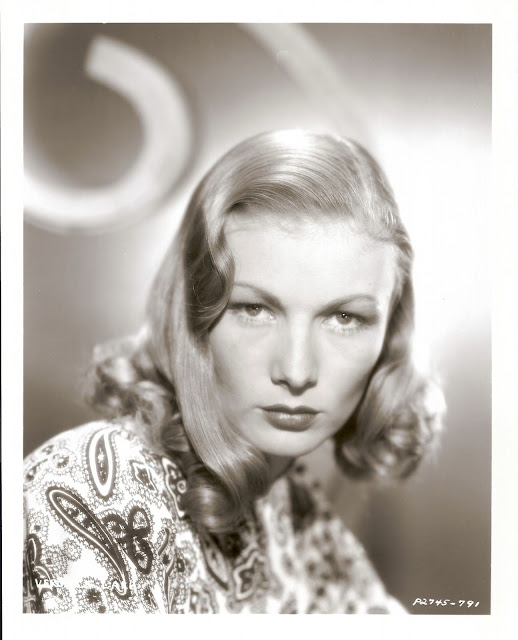 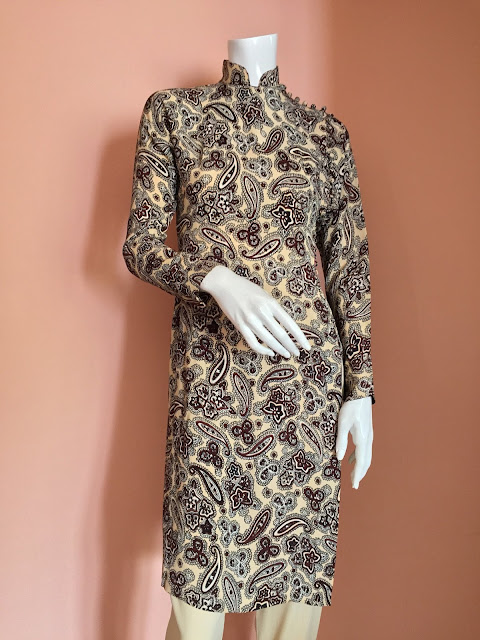 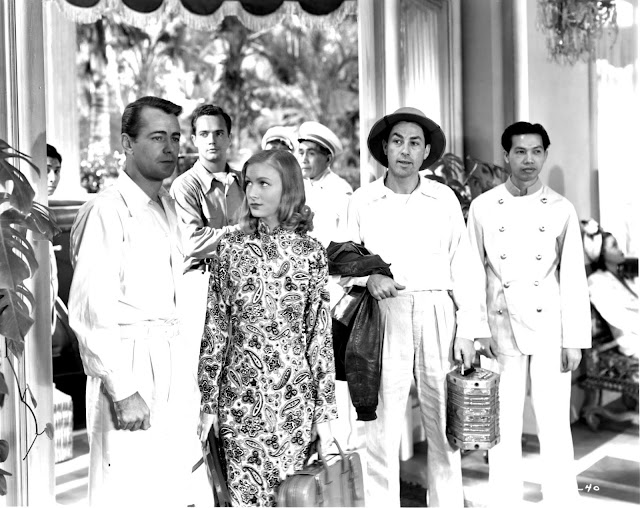 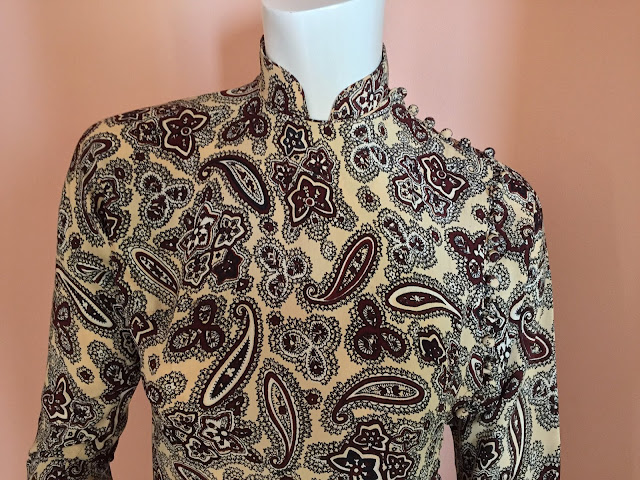 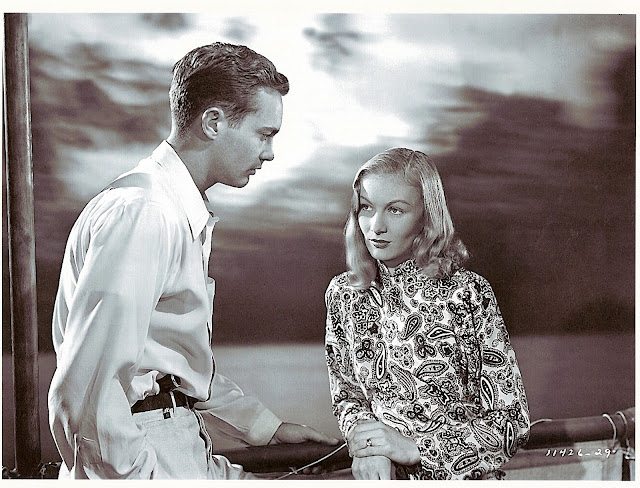 Designed by Edith Head, who ran the Paramount wardrobe department for decades, the costume is a cream silk crepe tunic with a brown paisley design, with side slits and raised buttons down one side, and matching cream silk wide leg pants. Both pieces have Paramount labels with "Lake" written on each, as well as Paramount Ladies Wardrobe stamps. 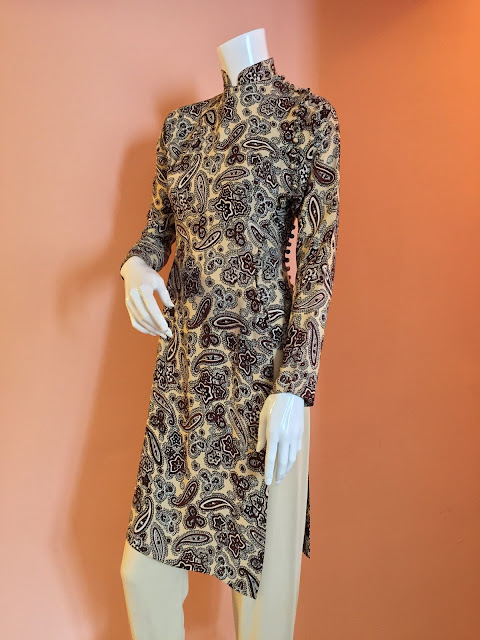 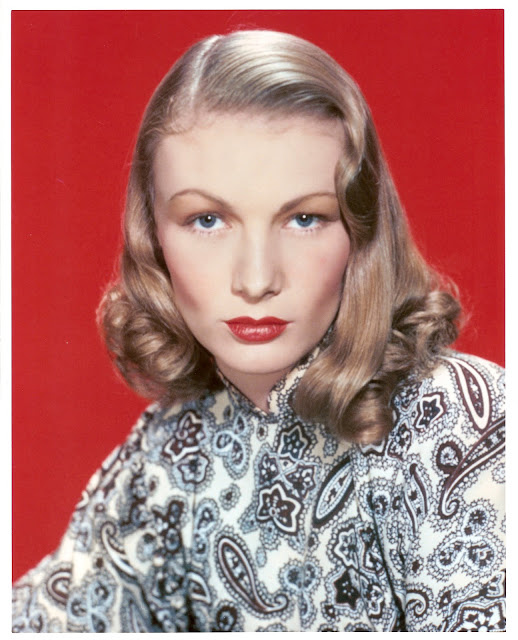 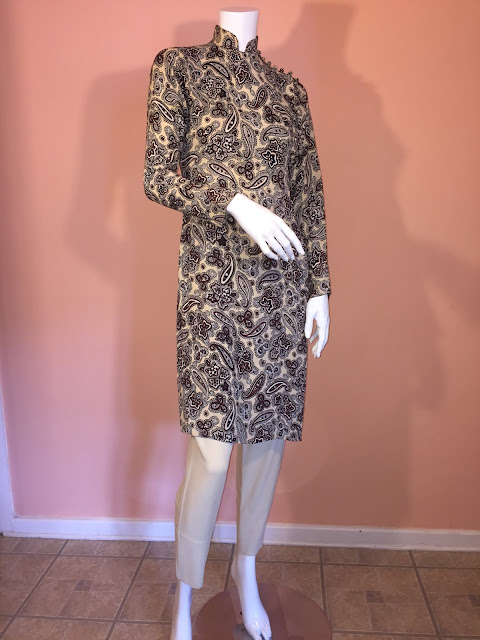 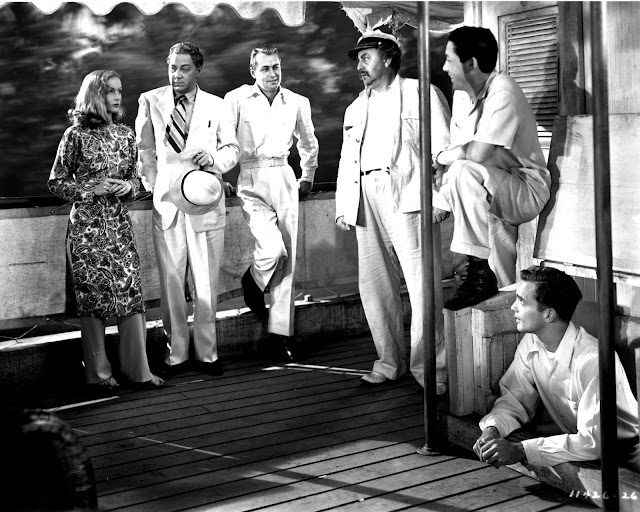 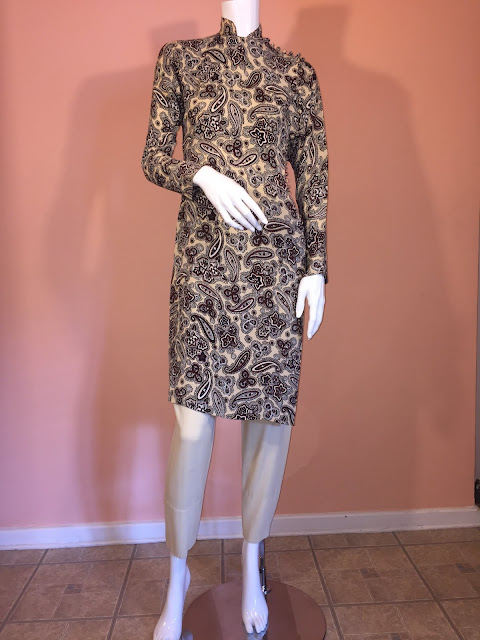 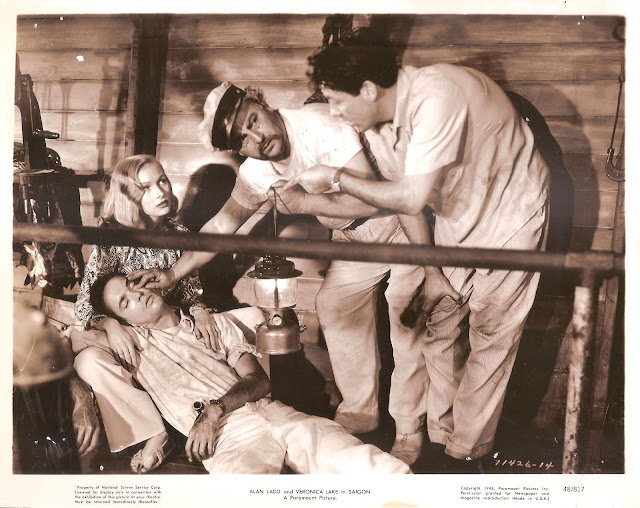 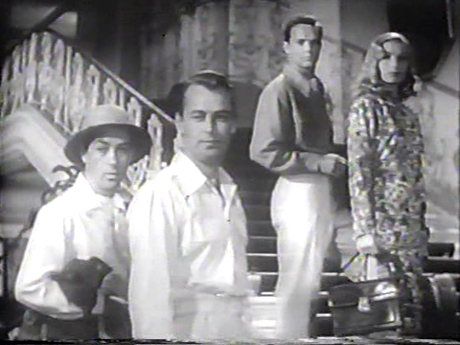 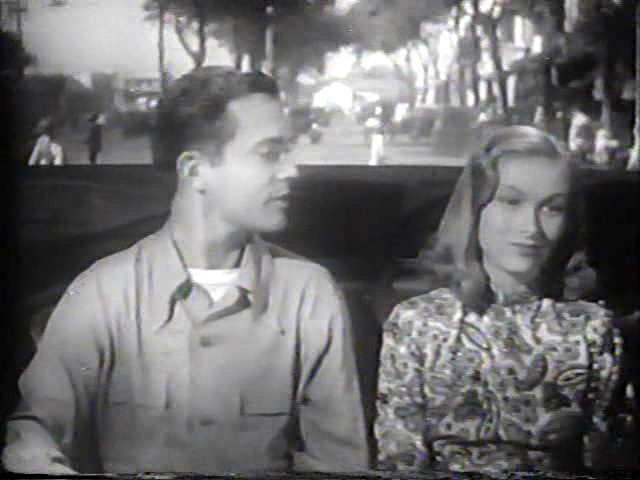 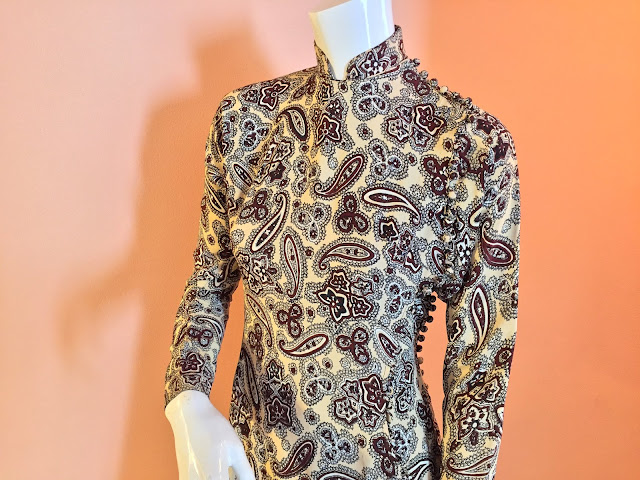 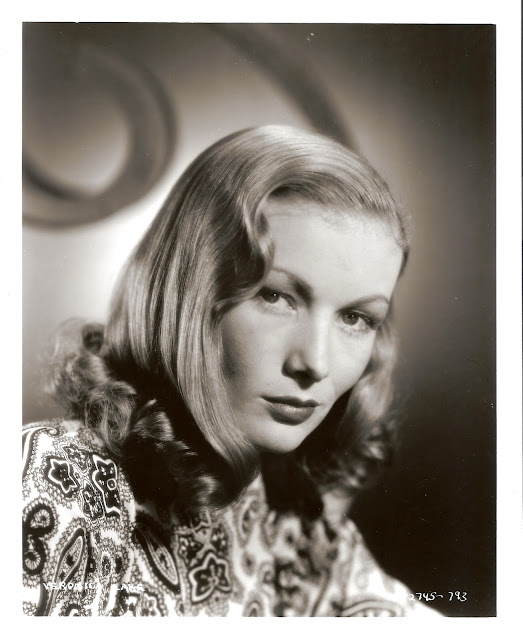 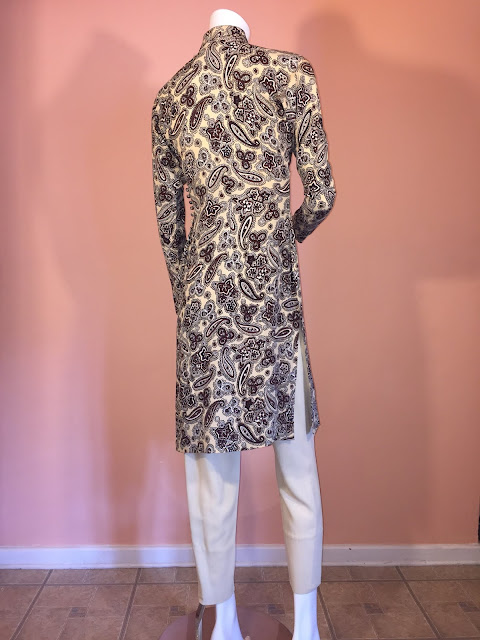 I came to acquire the costume in a roundabout sort of way. It was originally sold in the 1990 Christies sale of selected costumes from the Paramount archives. It was bought by Debbie Reynolds in that sale, and then the tunic turned up at auction about 10 years ago when she sold a few things from her collection. At the time I didn't know about the pants, I assumed they were long gone. Then I stumbled upon the Christies catalog and saw the pants listed with the tunic, and thought that perhaps Debbie might still have them. As it turns out, the two pieces had gotten split up in her extensive collection over the years, and thankfully I was able to purchase the pants directly to put the costume back together. It's great that she bought it and preserved it in the incredible archive that she amassed, saving so many costumes and Hollywood artifacts, and I'm happy to now own it and hope to exhibit it someday.