The post for the Gary Cooper jacket that he wore with Shirley Temple reminded me of an original one sheet movie poster I have for the 1938 Fox musical "Little Miss Broadway". It starred Shirley and George Murphy, along with a great supporting cast including Jimmy Durante. Below are photos of it before and after it was restored and linenbacked - 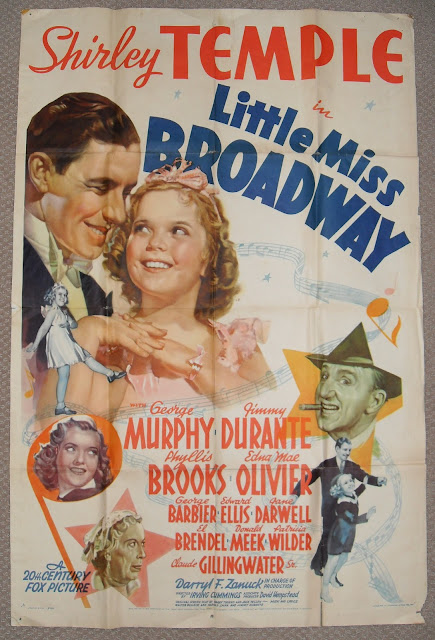 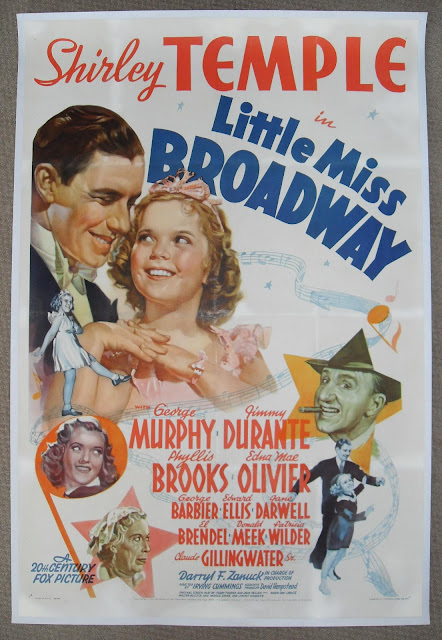 Luckily the color was still good, but the poster had darkened overall with age, and the paper was becoming brittle which is why it needed to be linenbacked. There was also an extra set of fold lines which can be seen in the before photo due to it being folded in half an extra time long ago...the most popular reason for linenbacking is to eradicate the fold lines. Any authentic movie poster made before 1989 will almost always be folded, since this is how they were mailed to the movie theaters back in the day. It was after 1989 that they started to be printed on thicker paper and sent rolled to the theaters. Check out www.learnaboutmovieposters.com to read up more on the history.

Restoration of a poster usually entails soaking it in a chemical bath to remove the dirt and get the brightness and color back. Then it is adhered to Japanese rice paper, and then mounted onto linen. After that process, touch up of the fold lines is done, and any paintwork that might be needed within the artwork. This is the most delicate part of restoration, and it's best to find someone who is top notch in the field when you know that paint work will be needed. Paper is also inserted where some might be missing due to chips and tears. In the poster above you can see where the lower right corner was replaced.

Most collectors prefer to get posters that don't need restoration, the ones that are in the best original condition always bring the highest prices. However once a poster reaches a point when it'll start to fall apart and continue to deteriorate, it's best to have the restoration done. This Shirley Temple poster was at that point, but I was happy to get it in any condition since posters for her movies have become more rare in the last 5-10 years. I think most of the ones that survive are in private collections. Thankfully this one is now preserved!﻿
Posted by Moviejoe79 at 5:43:00 PM